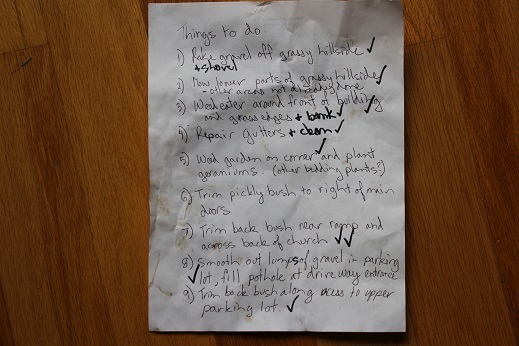 Two brave members came to the work party a day early and cut the front grass, persisting through a downpour of rain.  The rest of the crew turned up Saturday morning and got started on the "list". More mowing, weed-eating, weeding in the garden bed and shoveling and raking the gravel that had moved from the parking lot to the grass hillside during a winter snowplowing event. The morning wore on, and spirits remained undampened despite intermittent drizzle.  The ladder came out and gutters were repaired and cleaned. Clippers and a chainsaw attacked the bush encroaching on the back of the church. Lunch was served and most of the crew stayed on until the list was nearly done.  We saved the last item on the list for Rev. Alastair who couldn't make it till later in the afternoon. What a great time of hard work, fellowship and laughter. What a lot accomplished! As the old saying goes: "You're closer to God in the garden than anywhere else on earth"